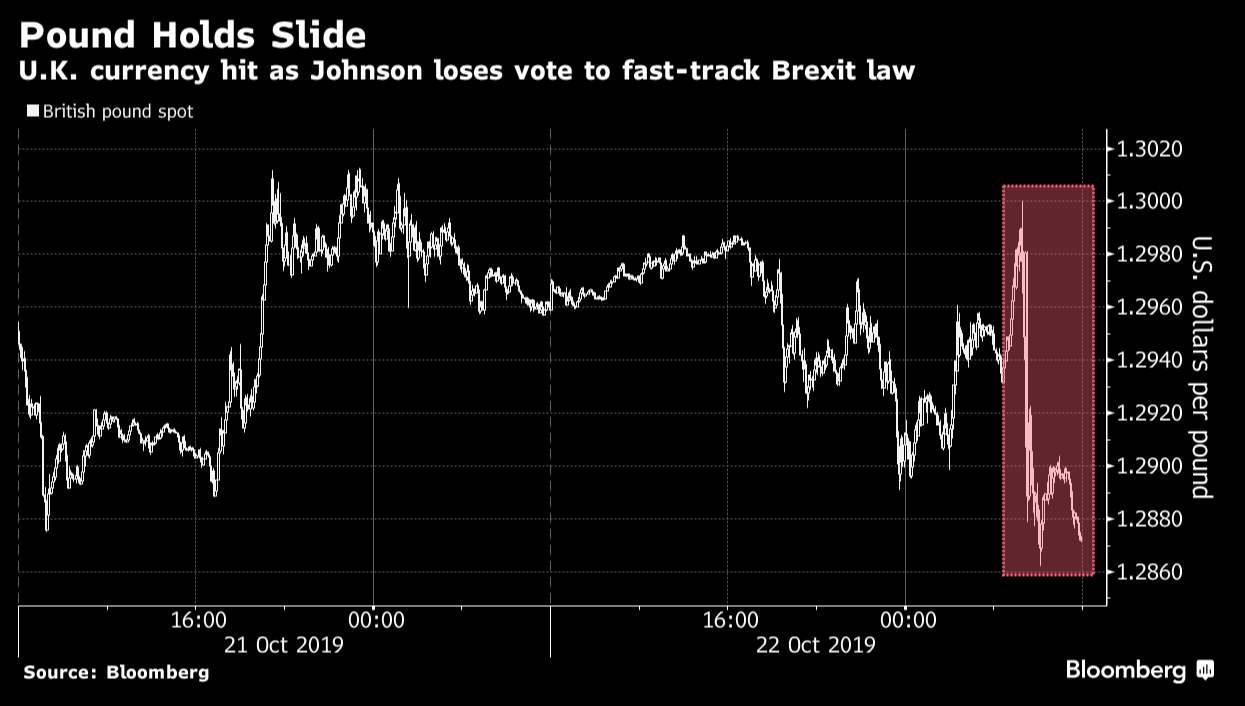 WILL BREXIT BE DELAYED UNTIL JANUARY?

Risk sentiment turned a bit sour with clouds of uncertainty ahead. British MPs made the Brexit process brake hard yesterday as they rejected PM Johnson's hyper-speed timetable for adopting relevant legislation. This puts the UK on course for another Brexit delay and perhaps a general election. EU Council Pres Tusk said that he will recommend EU leaders to give a nod for extension.

GBP firmed up initially but then pared gains. The move was likely just a brief corrective pullback, following yesterday's sell-off.

Elsewhere,preference for safe havens over riskier assets crystallized through the session with the initial round of risk-off flows seen as Japanese equities reopened after a holiday. JPY outperformed its G10 peers as a result, mainly at the cost of the Antipodeans.

Wednesday starts with the publication of the French business climate indicator at 0745 BST, followed by Canadian wholesale trade figures at 1330 BST. At 1500 BST the release of the flash consumer confidence indicator for the Eurozone will be closely watched.

A day of threats and promises from Johnson ended with an official in his office warning that if the European Union agreed to a request from the British Parliament that Brexit be delayed until Jan. 31, then the prime minister would call an election instead.

Stocks in Asia were mixed as investors continued to monitor geopolitical developments and watch earnings reports for signs of health in the global economy. The pound extended its slide.

While companies in other Group of Seven economies have taken advantage of low borrowing costs, as well as strong global demand and high rates of return, U.K. firms have been paralyzed by concern of a no-deal Brexit. Recent events suggest the risk of crashing out of the EU in the near term is low, though there’s still little clarity about the U.K.’s future trading relationship with the bloc.

Federal Reserve steams back into the US Treasury bill market (FT)

The Federal Reserve could soon own 12 per cent of the market for US Treasury bills, according to Oxford Economics, as it attempts to see off a repeat of the cash crunch that sent short-term lending rates spiraling in September.