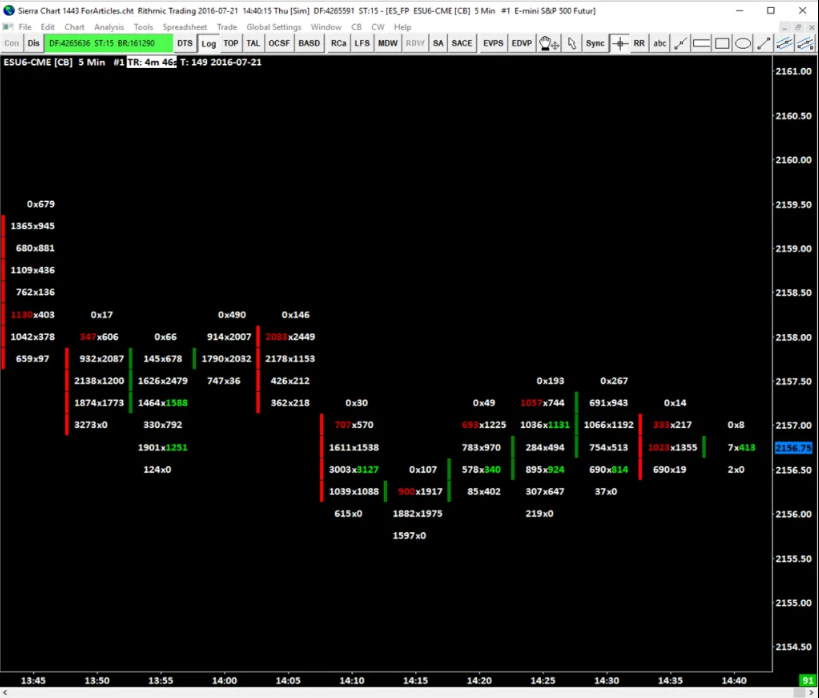 WHAT IS VOLUME IMBALANCE AND HOW TO FIND IT?

Recently, “order flow” has become something of a buzzword, as if a newfound popularity has grown around one of the oldest of market functionalities, a common-sense mechanism that has suddenly become imbued with a secret that retail traders wish to unlock, thinking that perhaps this, among other things, will be the tactic to give them an edge over other traders who may not have the know-how to use it.

What is Order Flow Trading?

Order flow trading is a method that attempts to anticipate price movement based on the current orders that are visible on both the buy and sell-side. How many bids are being placed versus asks? The unknown factor, of course, is the number of buyers and sellers that suddenly jump into the markets (or traders who might know if any large buyers or sellers are about to jump in).

For some reason, many traders have a hard time wrapping their heads around this concept. So, let’s begin with a story. Let’s take order flow back a few centuries to the early 1800’s.

In the novel The Whiskey Rebels, David Liss gives us a fictional account of an early (circa 1817) order flow trade. Although I can’t reconstruct with any degree of accuracy the fictional narrative that Liss presents, as it has been years since I last read the novel, I’ll provide you with a similar (fictional) account.

News of a company going bust hits the Philadelphia Stock Exchange. Short sellers plunge the stock into oblivion. Meanwhile, a number of enterprising traders, aware that the news hasn’t yet hit New York, find an opportunity to get in on the trade.

The speed of information travels as fast as the fastest equestrian. So, these traders, all on fast horses, decide to hightail it to New York to arrive just in time for the following day’s “opening bell.” Armed with the latest news (of the company going bust) and a reasonable estimate of the number of sellers that may be outnumbering the buyers, the traders plunge the stock, selling it short at every opportunity.

Enthusiastic buyers support the stock despite its accelerating rate of decline. That is, until the news begins to circulate. Still, not every buyer is aware of the company’s near-demise. And every bid they place, all of it far above the actual worth of the company, gets hit by market sell orders, until the stock gets utterly destroyed. Finally, the news reaches everyone on the trading floor.

We’ll end the story there. But that’s one version of very old-fashioned order flow trading…complete with horsepower edge and a 19th-century “go-ahead” with “elbows-out” attitude.

In today’s electronic markets, the old-school attitude might remain the same, but the means, technologies, and laws regulating order flow are a bit different.

As it always had been, order flow is the mechanism that moves prices up and down. It is the balance or imbalance of buyers and sellers (bids and asks). It’s the onslaught of market sell orders that overwhelm the buy limit orders, or the market buys that overpower the limit order sellers.

Let’s take a step back. To understand how order flow works, you must understand how the interplay between the Depth of Market and Market Orders dynamically form the order flow process. Let’s use the Sierra Chart Trading Platform for the purpose of illustration.

Understanding the Depth of Market

This is a Depth of Market price ladder, more commonly referred to as a DOM.

There are three columns–one to the left, middle, and right.

Middle Column: this is where prices are represented (in this case, we’re looking at prices for the ES, or E-Mini S&P 500).

Left Column: this is the Bid side, where buyers place their limit orders.

Right Column: this is the Ask side, where sellers place their limit orders.

The current price highlighted in blue is the price at which the last trade took place–someone bought contracts from another who sold it to them.

The best bid and best ask are the pair that are closest to one another.

Now that you understand the basic components of a DOM, let’s explore how the bids and asks work to create the transactional dynamics known as “order flow,”

Let’s take a closer look at the DOM again.

The image you are looking at is frozen (obviously). But if you’ve never observed a DOM during busy trading hours, you might be surprised at how fast bids and asks move. This image could have lasted a few seconds during the sleepier trading hours, or milliseconds when the markets are bustling. The main point is that what you see here is, in reality, quite dynamic, with bids and asks sometimes moving at a velocity that your eyes and brain can hardly comprehend.

So, what just happened with the current price? It got filled at the ask. But who filled it?

Now comes a critical piece of info that you have to understand:

Both the bid and ask levels are all limit orders. The buyers are saying “I want my bid to be filled at this price or lower (which would be a better price). The sellers are saying the same thing, but their “better” price is higher. After all, it’s a game of “buy low and sell high,” right?

So, we have a standoff. For the moment at least, the buyers and sellers won’t budge. Their bids and asks will not be filled the other. So who filled the ask? A buyer with a “market order.”

A market order practically means “fill my position NOW…at the best (bid or ask) price.” In the case above, a buyer placed a market order and got filled at the best asking price, which is at 2168.00.

You get the picture now? Another way to look at it is that limit orders are there for market orders to fill. Another variation–limit orders will not get filled until a corresponding market order matches it.

Okay, but how does this move price? Now, we’ll describe the “order book” dynamics, after which you’ll clearly understand how prices are moved.

Understanding the DOM as an Order Book

Let’s take the DOM data and transfer it to a spreadsheet so that we can simulate a number of different scenarios.

Scenario 1: A large trader enters a market order to buy 1,000 contracts. This order will go to the best asking price. Below is the result.

(The example above is hypothetical).

Scenario 2: A negative economic report has just been released. Hundreds of traders are looking to exit or sell short the S&P 500. All of them enter market sell orders at once–meaning sell at the best bid price.

The total number of market sell orders amount to a whopping 7,000 contracts!

How Might You Get an Edge in Order Flow? (or, How to Analyze Order Flow)

Getting an edge in order flow is a tricky matter as you are always reading past information. In terms of order book data, you can only see the limit orders–in other words, you cannot see the market orders that jump in until the moment that they do.

Nevertheless, there is “footprint” software that exists to interpret the imbalance of orders and trades to help you better speculate whether a price move indicates short-term bullishness or bearishness.

This is a lot to digest, so let’s break it down. Imagine this scenario.

In a footprints chart…

So if we see the following…

In a footprints chart, you are looking for imbalances between the bids filled and asks filled. Imbalances typically move price.

And here’s the kicker: if you can identify the imbalance, then you might have more insight on order flow than someone who can’t see the imbalance.

So if you see the following, then you can see there is an imbalance toward the downside as the selling pressure (194 contracts) was 625.81% greater than the buying (of 31 contracts). The left side will show an imbalance by highlighting the numbers red. This indicates potential bearishness.

In a reverse scenario, the buying pressure below is 444.83% greater than the selling pressure. Hence, it is highlighted green to indicate an imbalance. This indicates potential bullishness.

Question: what constitutes an imbalance?

Answer: the % imbalance is up to you.

The footprints chart below has a setting of 300%, meaning that only buying or selling pressure of 300% or above will be highlighted. In the next example, you can see tremendous selling pressure which plunged the price of a given commodity.

Looking at the percentages, you can see how the selling pressure plunged prices downward.

What might this mean for the next bar? This is where a footprint-like chart can give you a closer insight into order flow. This is what a footprints chart looks like:

Caveat: you don’t know which market orders are about to jump in BUT the current indications of buying or selling pressure might help inform your directional bias.

And when it comes to using order flow to your advantage, such information is probably the closest thing you’ll get to understanding the forces shaping the current market. 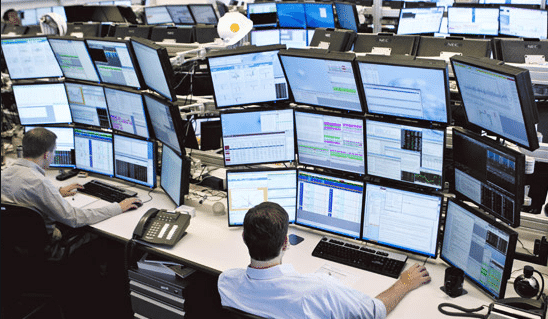 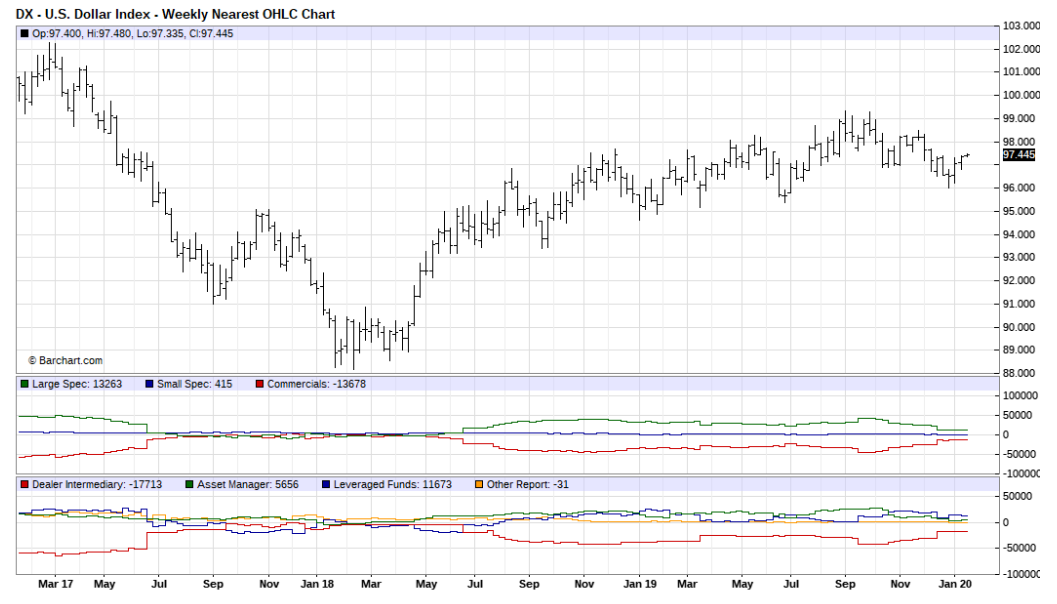