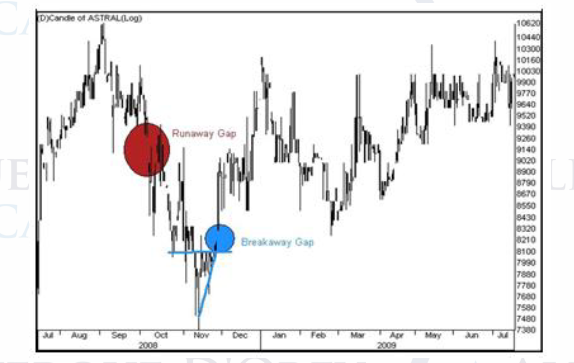 The volume is the number of shares or contracts traded. Each day, or whatever time scale is being looked at, the volume is represented by a vertical bar below the price chart.

Volume can also be plotted on weekly charts, and shows the total volume traded for the week. Usually we don’t bother to show volume on monthly charts, as it is not very useful over that timescale.

As a general rule, if you are looking at an uptrend and volume is increasing, then the market is considered strong. If the volume is going down in an uptrend it shows the market is weak. Even for a downtrend, the strength of the move depends on the volume – more volume means that more market participants are joining in, and suggests a continuation of the trend.

Volume is the secret to knowing how much urgency there is to a market price move. If there is much volume or pressure, then it helps you to see that the move is well supported and strong, and have more confidence trading on it. Volume should always increase in the direction of the existing trend, so in an uptrend the volume gets more as the price increases, and declines on retracements – if you see anything else, it is a warning sign. If you were to see a new high formed but the volume was reducing, or if the volume increased on corrections, it would suggest trouble ahead, and the trend might be in danger.

As a reminder of what we covered in the previous module on patterns, the volume has an important part to play in confirming validity of the pattern. Remember that in identifying the head and shoulders pattern, the volume got less on each successive peak, and picked up during the declines. A similar thing happens on triple tops and double tops. Whenever there is a resolution of the pattern, which in these cases is a breakout to reverse the trend, you should expect to see much heavier volume. If the breakout retraces, it should do so with light volume and find resistance at the previous support.

If you think about it, looking at both price and volume gives us two different views of the same thing that is the buying or selling pressure on the security. The volume shows us directly the pressure which has been resolved in sales, and the price reflects the amount of supply and demand pressure, whether or not it has had much trading. Technicians often say that volume precedes price, which means that when the volume is slowing, you should look towards the price slowing or reversing soon too.

Open interest is a term used in futures and options, and is a count of the number of contracts outstanding. You will recall that futures or commodities are traded with a large amount of leverage or gearing, which means you do not have to pay for the goods that you are contracting for. In fact, most futures traders have no intention of fulfilling the contract that they take out. Although the futures market was set up as a form of hedging for farmers and producers, speculation is a much larger use of futures contracts nowadays.

At the end of each day there are many future commitments represented in futures contracts, and these all represent transactions that must take place some time. While most traders will not go through with the contract, the contracts are still in existence unless both parties have cancelled them with an agreed payment and they must be completed by whoever holds them at the expiration date. Open interest is commonly plotted as a line under the price chart but above the volume bars, or it can be overlaid on the volume or price charts. Below you see the open interest line, in pale blue, over the darker blue volume bars. This is a chart of Light Sweet Oil futures.

You can see how typically the open interest dips down at the contract expiration dates, which are shown by red dashed lines. Obviously, contracts are often settled at those times, so the number of open contracts reduces. Note also there are some high-volume trading days which make little or no difference to the open volume.

One point it is very important to note is that the open interest represents the total number of longs or shorts outstanding, and not the sum of them. Open interest is the number of contracts, and each contract has both a buyer and a seller, so two market participants make only one contract. The change in the total open interest figure each day, whether up or down, is an important indication of the mood of the market.

In the same way as we did when looking at volume, we can set out some general rules indicating what open interest means about the strength or weakness of the market. For instance, if prices are rising in an uptrend and total open interest is increasing, then the market is looking strong. Because the interest is up, new money is flowing into the market coming from people who have not been involved, or who have decided to increase their stake, and this is a positive sign.

This can be summarized as follows:

If you want to find out more about open interest for particular commodities, you can use the Commitments of Traders Report which is released by the Commodity Futures Trading Commission (CFTC) every Friday. If you point your browser to www.cftc.gov, you can click through to Market Reports and Commitments of Traders is on the top of the list.

The report shows open interest, and breaks it down by the type of trader, whether it is a producer or user taking a hedging position, a dealer speculating, or ‘other’ which includes small traders such as you. You can compare the positions of the participants as the long and short figures are given.

You will often want to give more credence to the hedgers than the speculators, as they are usually more likely to be right. So if they have a majority of long positions, with the speculators and traders taking the short side, it suggests a bullish market and if the current trend is down could signal a reversal. If in a rising market the commercial hedgers seem to be going short while traders both large and small are taking long positions, you should watch whether the market is reaching a top. So what?

A blowoff occurs when the price shoots up with increased volume, but the open interest declines, and the price peaks and drops abruptly. You can see that the high of 83.975 occurred with an increase in volume but a declining open interest. The result was a sudden drop back.

Just to recap, the reversal day (or week or month) does not necessarily signal the top or bottom of the market, but often will. It does however always signal a significant high or low in the market.

As a final comment on price patterns, I now want to discuss price gaps. I left this topic over from the previous module as it was getting so long. Gaps, as you might expect, are spaces in the price chart where no trading has taken place. All the trading in one day has taken place completely above or below the previous day, leaving a gap or window, as the Japanese call it on candlestick charts, between the trading ranges.

If the gap is to the upside, this can generally be regarded as a strong indication. The corollary of that is that gaps to the downside are a sign of weakness. While you can get gaps on weekly or monthly charts, and when you do they are significant, you’re more likely to see them on daily charts.

One of the trading sayings is that ‘gaps are always filled’, implying that even if the price jumps over the space, it will in due course come back there. That’s not really true – some types of gaps should get filled, but others won’t. There are three types of gaps, and they each have different significance.

The breakaway gap is often seen at the end of a price pattern, and is a sign of a strong breakout to the new direction, in the case of a reversal. It will usually have a heavy volume, such as you expect when establishing the new trend, and it’s not likely that the price will come back and fill this gap.

This type of gap shows strong market action, as you get when a pattern resolves and breaks out, and will give you confidence that the trend is sound. Although you don’t expect this gap to be filled, and the heavier the volume is the less likely that is to happen, the price can return and use the gap as support in an uptrend or resistance for a downtrend. If the price should come back and fill the gap, then that shows a failure of the breakout and trend.

The runaway gap is a good sign of a strong trend, and occurs while the trend is moving robustly. It’s really a sign that the trend is moving fluently. It’s often around the middle of the move, so sometimes it is known as a measuring gap – some analysts will project the distance the trend has already covered, and expect it will continue for the same distance again. Having said that, you can also sometimes see a series of several runaway gaps in a move.

As before, the gap should act as a support or resistance on any retracement, and probably will not get filled. A closing of the gap would be regarded as weakness of the trend.

This is the type of gap that may well get filled. As the name implies, it’s a kind of last gasp at the end of a move or trend. The price will leap upwards, in an uptrend, and the trend will fade, with the prices coming back soon, probably to fill the gap. In fact, when the price closes below the gap, this is a further indication that what you are looking at is the exhaustion gap. As you might expect, when you do get the close below the gap this is a strong bearish signal.

Here’s a chart which illustrates two types of gap. Towards the centre of the chart, there’s a gap downwards, a breakaway gap, which signals the start of a heavy decline. Over to the right is an exhaustion gap in December, in the uptrend, and you can see that this is filled in a few days. In this case the price trend reversed again and continued up after the retracement.

The island reversal pattern is an example of two types of gap. Sometimes after an exhaustion gap, at the end of a trend, the price will trade sideways for a few days and then gap in the opposite direction, with a breakaway gap, to start a reversal. This leaves the sideways price action as a kind of ‘island’ with a space on each side. This is a strong reversal pattern.