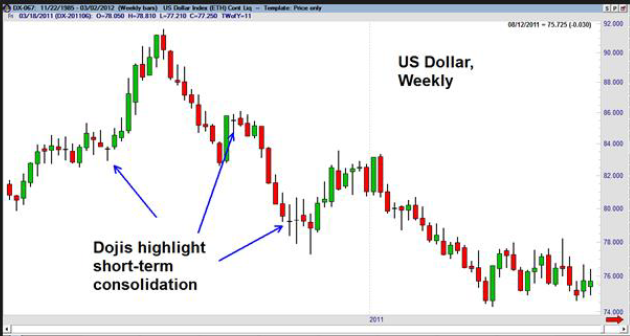 Here is a summary of how candlestick charting methods are best used in your trading.

The true Doji has no height to the real body, showing that opening and closing prices were the same. Sometimes in the interpretation you will allow a very small body, as the same principle applies. The dash which is the body can be anywhere on the shadows or wicks, even at the top, which is called a Dragonfly Doji, or at the bottom, when it is called a Gravestone Doji because of the appearance.

A spinning top candlestick has a short real body, which can be either white or black, and long upper and lower wicks or shadows. In a similar way to the idea of the Doji, these can often represent indecision, and may be interpreted as a trend losing steam. When deciding if the body is particularly short, you should compare it to adjacent candlesticks. If all the trading has been with relatively short bodies, then the spinning top must be much shorter.

As you may guess from the foregoing, when a candle has a long body then it is considered to be a strong indication of the market. A long white body shows strong bullish interest, while the long black body is definitely bearish. When the body is the whole candlestick, with no shadows above or below, then it is called a Marubozu.

Candlestick patterns are very useful for spotting reversals but for the setup to mean anything there has to be a trend that is weakening. A reversal pattern is made of one or more candlesticks that often indicate a reversal in the trend. Three general points to note at the