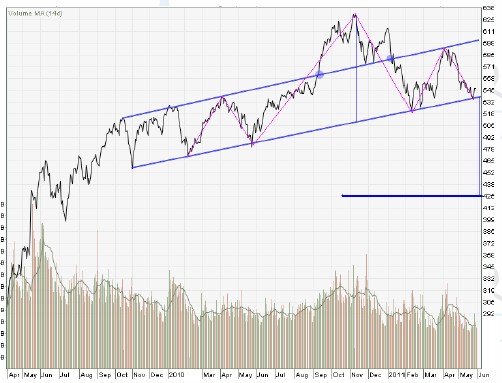 Sooner or later, any trend will end up reversing direction. As a spread trader, you need to be able to spot the signs of a trend that’s running out of steam. If you’ve been riding that trend, it is an obvious time to quit while you’re ahead. And if you’re really confident that the trend is about to change direction, you might want to open an opposite trade, backing the price to go in the other direction.

But before we look at the pattern, there are some general guidelines that are common to all reversal patterns.

As stated above, this is the archetypal reversal pattern, and others are just variations on this idea. This happens in an uptrend, although there is a similar pattern for a downtrend. The uptrend weakens, and reverses, and the price chart looks like this

The inverse head and shoulders occurs when a downtrend reverses into an uptrend, and is basically the head and shoulders pattern we have just analyzed turned upside down. As such, it’s really just a gradual change in the direction of the trend, marked by a penetrated trendline and weakening of the current trend.

Again, there are three points to the pattern, with the middle one, the head, being lower than the shoulders. The neckline is drawn across the two peaks between the low points, and it’s necessary for the price to rise clear of the neckline, otherwise it could just be a consolidation or sideways trend. The neckline is quite likely to slant downward, but does not have to for the pattern to be valid. If it slopes upward, then you will have to wait a little longer for it to be broken and to enter a long position, but it does indicate greater strength in the market.

The Failed Head and Shoulders

Even if the head and shoulders pattern goes ahead as described, with a decisive break through the neckline, it is possible for it to subsequently ‘fail’, that is, not follow through with a change of trend. The first indication that you will get of this is that the price may go back over the neckline – this should not happen once the neckline is broken, and is a sign that the trend reversal is not as solid as it might be. Sometimes the original trend will resume.

This goes back to what I said at the beginning of this module. Don’t look for precision in reading the signs given by technical analysis – it will drive you crazy. Make sure that you understand enough to know what the signs mean on the balance of probabilities, trade accordingly, and don’t lose sleep over trades that go the wrong way. The way to deal with those is to make sure that you close the trade as soon as you can see it is not working out. From what you are learning, you will be able to recognize the signs and cut your losses quickly if need be.

Because the head and shoulders is so widely known, you may find that other traders beat you to the punch in trading the reversal, and you lose some of the move. For this reason, you may find traders that don’t wait for the confirmation of the pattern before they enter the trade.

For instance, some will anticipate the completion while the right shoulder is still in formation, and start entering some trades. Some may even try to jump on the reversal at the right shoulder to maximize their gains. These tactics may work out, and if you make sure that the volume reinforces the pattern you will have the best chance of success. You risk that the pattern will not go-ahead as expected, so this is a possibility that you must consider in deciding when to trade. A less risky way of making this trade might be to put on half of your planned outlay at the first sign, and add the rest after the pattern is validated.

You are much more likely to see double patterns than triple patterns. It is almost as common as the head and shoulders reversal pattern.

As you can see, the two peaks are at roughly the same level, showing a weakening in the uptrend. After the second peak, the price violates the trendline, which in itself tells us that the trend is changing. At this stage, it could be headed for a lower slope, or for a period of consolidation. But when the price drops below the previous low point, between the two peaks, this completes the pattern and confirms the reversal signal.

The equivalent double bottom is just the same

A Saucer Bottom is a semi circular rounding bottom that looks like a bowl on a price chart. The volume dries up during the formation of the saucer and increases as prices approach the resistance. Saucers occur somewhat infrequently but when they do they are among the most reliable patterns to trade.

Profit Target – can be measured by adding the depth of the saucer to the previous price high that forms the resistance of the formation.

Profit Target – can be measured by adding the depth of the cup to the previous price high that forms the resistance of the formation.

Continuation patterns are the other type of patterns that you will be able to identify on the charts. They are usually shorter term than the reversal patterns, and the main difference from reversal patterns is that they suggest trend consolidations and continuations rather than reversing the trend. Continuation patterns commonly occur when a price starts going sideways after trending, and they indicate that the price action is nothing more than a pause in the trend. This is one reason that they are only seen as shorter-term. If they were long-term, the chart would be interpreted as trendless movement, and any subsequent trend would constitute a breakout.

As with a reversal pattern, for there to be a meaningful continuation pattern there must have been a trend to be continued. The direction of the trend is significant for some of the patterns, and other patterns simply indicate a continuation of whatever was prevailing before they occurred. Whenever a trend pauses, it must finally resolve into a reversal, a continuation, or trendless movement, and as mentioned previously most of the time trends continue rather than change. This is as first noted by Dow.

These patterns are usually classified into one of three types of triangles:

The broadening formation is a kind of triangle, but not usually included with the three previous examples. That is because it behaves totally differently to the others. As the name tells you, this triangle is the other way round, with the trendlines opening out as time passes, rather than converging to an apex. It sometimes also called a megaphone top.

You get none of the benefits of the others, with price and time constrained and limited by the trendlines that surround the price. Instead, this is a chaotic time in the market, and you are best not to trade.

The flag is basically a rectangle, with two parallel trendlines. In the example above the trendlines are defined by three peaks and three low points. It is said that the “flag is flying at half mast”, with the sharp increase in price looking like the flagpole. This implies that the continuation signal will be followed by a price move similar in size to the prior one.

Both the flag and the pennant are seen in a position as shown, where there has been a sharp move in the price. In fact it’s one of the requirements for identifying the flag and pennant that they are preceded by a sharp practically straightline move, as shown above and below. It’s almost as if the price has to catch its breath after the surge before continuing on. The flag can occur in both up and downtrends, and can be expected to slope against the trend – so in a downtrend, it would slope upwards. Perhaps because of the strength of move beforehand, it’s very rare that a flag pattern would let you down and become a reversal. It and the pennant are considered some of the most reliable continuation patterns.

As you can see, this is very similar to the flag. Once again, I have shown it with three points of contact on the trendlines, the preferred number, although this can vary. It looks a bit like the symmetrical triangle, but there are two big differences. First, it comes after a steep rise (or fall) as shown. Second, it is much shorter in duration, at 1 to 3 weeks, whereas the symmetrical triangle may take many weeks to resolve.

Trading Tip – Just like flags, pennants are best traded when they appear as tight formations. The tighter the pennant, the more reliable it is as an indicator of continuation of the price trend.

The wedge pattern can occur in either uptrends or downtrends, and is another type of triangular shape that captures the price movement for a time. It looks just the same as any of the other three (converging) triangles with the single exception that it has a noticeable slant. It is identified as two converging trendlines coming together at an apex, with the apex above or below both of the starting points for the lines.

In the same way as the flag, the wedge tends to tilt in the opposite direction to the trend, or against the trend. Here is an illustration of a falling wedge, which is normally considered bullish and occurs in an uptrend.

The rectangle pattern goes by several other names, and is distinctive enough to spot easily on a price chart. You may recognize it as what Dow called a line, and it is also referred to as “trading in a range” or as a “congestion area”.

It is simply a consolidation period in a trend, which can be up or down, and usually ends with a continuation in the original trend direction. It looks like this in an uptrend: