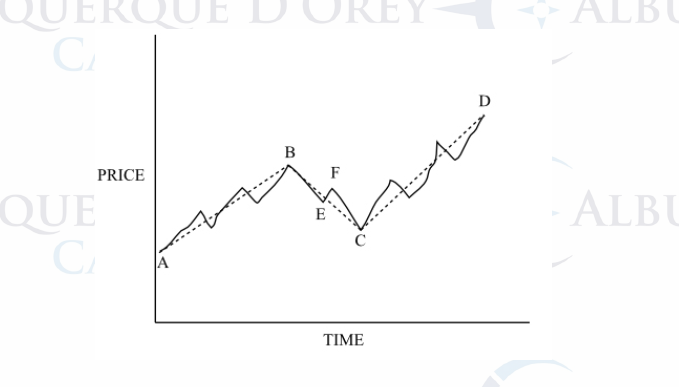 What Is a Trend?

A trend is something that many people think they can recognize intuitively, but for the purposes of analysis we have to pin it down more clearly than that. We have to be objective and take the guesswork out of it in order for our work to be repeatable and produce the same effective results each time. Very roughly, the trend is just the direction of the stock price, as in ‘uptrend’ or ‘downtrend’, and sometimes we can just look at the chart and be pretty sure that we know the trend.

One of the problems, though, is that price charts don’t move in straight lines, at least not for very long. Whether going up, down, or sideways in overall terms, you can practically guarantee that the price will zigzag up and down. You can look on these zigzags as being the cycles of the market, with many different time frames of cycles superimposed on each other. But if you cut through the clutter, what you’re looking for with an uptrend is successively higher peaks and higher low points, or troughs. Here’s an example:

The Parts of a Trend

Each trend becomes part of the next bigger trend, so the minor trends make up the secondary trend, and the secondary trend is part of the primary trend, and is sometimes called a ‘correction’ to that trend. Commonly a major trend may see the market stop to correct itself with an intermediate trend for a couple of months from time to time. This means that in practice charts are not quite as neat as already illustrated. Here’s a more complex illustration of how prices move.

In general, it is good practice to follow the trend. If you don’t, then you’re betting against the market. If you are still learning to trade, it is a good idea to ignore trading the secondary trends and concentrate on the main trends, simply trying to identify as early as possible when the secondary trend is finishing so that you can buy (or sell) when the primary trend resumes. This is much more straightforward than trying to guess when to switch between the short and long positions, as you would have to if you were trying to trade both types of trend.

The troughs, or low points, can be thought of as support points – they are the level down to which the price can go, but no lower. The price is supported at that level because the buying interest is strong enough to overcome the amount of selling. When the price goes that low, sufficient people want to buy the financial security that the price is maintained, as a direct result of supply and demand. As a result, the price goes down to that level and turns back up again.

Similarly the peaks indicate the resistance level. When the price gets that high, a lot of traders decide to sell and take their profits, seeing the price level as a reasonable place to cash in. Less people are interested in buying because of the relatively higher price, so the excess of supply over demand or the buying interest turns the price back.

Now for reasons I’ll go on to explain in the next section, often support and resistance reverse their roles, once they are penetrated or ‘broken’. If the price goes up through resistance by a good way, then that resistance level becomes a support level when the price comes back down. Here’s an illustration of that.

And in the same way, when you have a downtrend, often the support which gets penetrated becomes a resistance next time the price rises, as you can see here.

The Psychology Behind Support and Resistance

The reason that support and resistance work, and that the price will keep on touching and rebounding off them, is down to the psychology of the market participants. There is no ‘magic’, just commonsense. One explanation of why it works so well involves thinking of the psychology of the traders in the market. Now there are many reasons that traders will buy or sell, but they are usually driven by the profit motive – either to position themselves to make more money, or to try to ease the pain of losing money for a trade that they have already taken out. For the sake of this discussion, we’ll think of the people making the trades as three groups:

Imagine that a stock has been trading between two levels, a support at the bottom of the price range, and a resistance level at the top. When the price is rising off a support level, they would be thinking like this:

So suddenly, instead of buying at the old support level, and thus making the price bounce back up, everyone is thinking of selling if the price gets back up there. If they all do that, the laws of supply and demand say that the price will go down. The old support becomes the new resistance, not by magic but by human nature.

To be able to draw trendlines, you obviously need to have a trend, and you should confirm this as stated previously – an uptrend has successively higher low points, and a downtrend has successively lower peaks. It takes just two points to draw a straight line, so you can start your trendline as soon as you have these

At this stage, it is only a tentative trendline. Many analysts wouldn’t even draw this until the price has gone higher than the previous peak, as shown, which suggests that it is showing a trend. But before you can think of it as a valid trendline, you really need to have a third low point touching it, just like this:

The most basic use of the trend line is to see where you can buy in an uptrend, as you can expect the price to come down and touch the line during corrections or retracements, before going back up again. The line effectively provides a moving support for the price, and you can use this to improve your trading.

In a downtrend, the opposite applies, the trendline is a resistance. The price will keep coming up to touch the trend line and you may choose to go short when the price goes up to touch it on a retracement. Once again it is a moving target that changes over time in line with the current trend, and you’ll quickly see signs of any change in the trend.

In this way, the trend line can be more useful than even the support and resistance lines. It gives us a moving target to determine the extremity of price action that we should see, so it is possible to follow along with the trend and take maximum advantage of the price fluctuations.

Just as with the support and resistance levels discussed earlier, the trendline can reverse its role once it has been violated. The trendline on an uptrend, once clearly broken, may become a resistance to the changing price, as shown here

The same can apply with a downtrend, where the trendline becomes a support after it has been broken.

Drawing two lines upon a chart across past highs and lows can help you decide your next trade. This is another idea that develops out of the trendline concept and is referred to as the channel line, sometimes called the return line. Sometimes you’ll notice that prices keep between two parallel lines, the trendline and another line on the other side of the price action, which is called the channel line. You’re most likely to see this in a stable uptrend or downtrend. All you have to do is draw your trend line, then draw a second line parallel to it, from the first high point (for an uptrend) or low point for a downtrend. Here’s how it looks on an uptrend